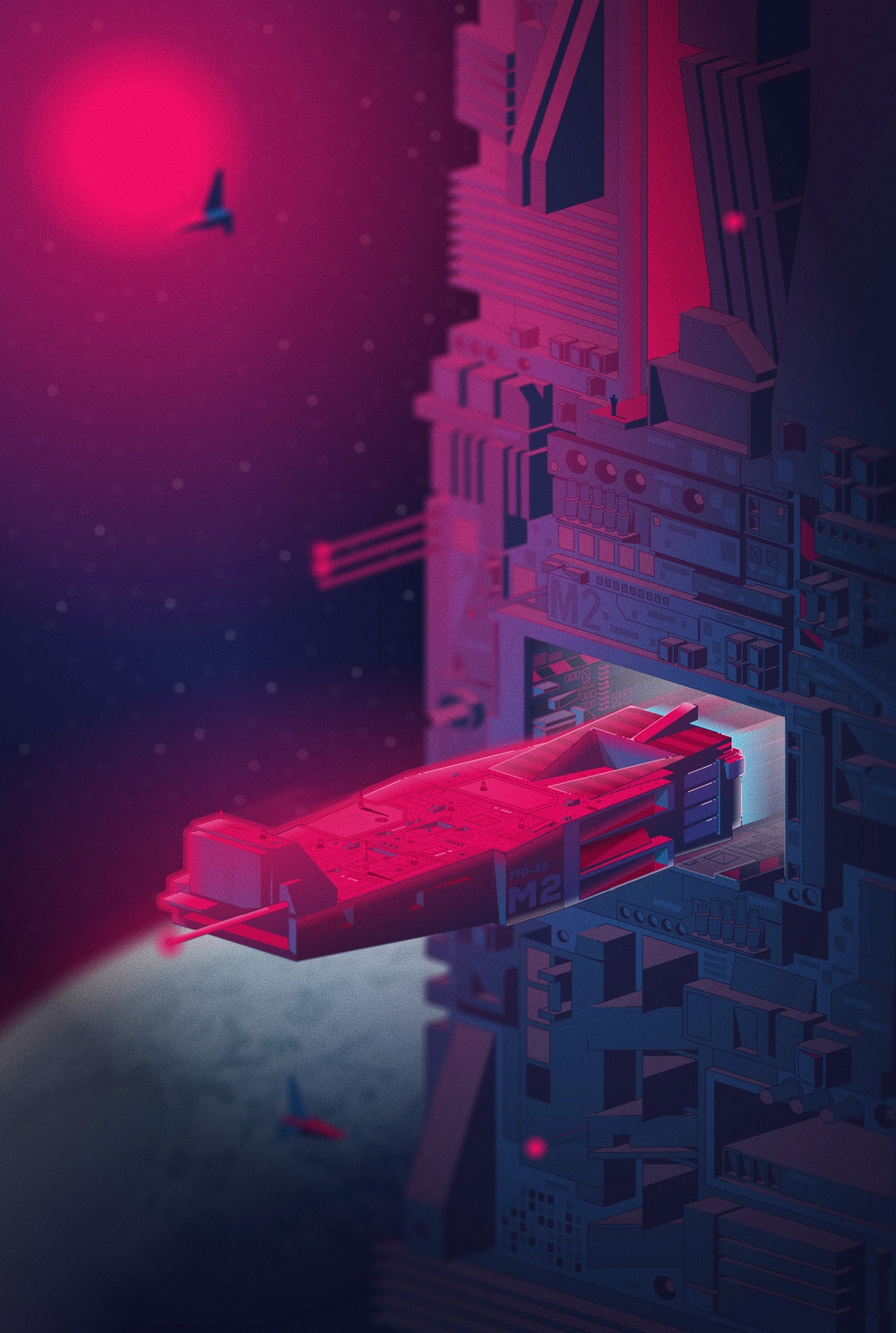 The final corridor held no transport disc or any other device that would serve
to deliver Caretaker faster to her destination. It seemed an odd design choice, as if
to force whoever might seek out Endgame, to consider their purpose. But I have no
choice here. Existence is falling apart, I have to … (read more)

The final corridor held no transport disc or any other device that would serve
to deliver Caretaker faster to her destination. It seemed an odd design choice, as if
to force whoever might seek out Endgame, to consider their purpose. But I have no
choice here. Existence is falling apart, I have to talk to Endgame. And if he hasn’t a
solution for us? No contingency plan, no alternative? What if he isn’t even online
anymore?
“Caretaker?” Tipy’s voice pulled her back to reality. To the sound of her
steady footfall echoing, bouncing up and down the endless hallway. “There’s
something I don’t understand.”
“And what might that be, Tipy?”
“If Endgame had a solution to this, wouldn’t we already know of it? Isn’t that
the entire purpose of the Ark?”
“The purpose of the Ark?”
“Well… Aren’t we here to preserve life? To protect it from the disintegration
of existence until Endgame figures out a way for us to survive?”
To preserve life? I have done nothing but do system checks for eons.
“So if he was working on it until now, wouldn’t he have alerted us to a
possible solution if he’d have found one?” Tipy went on with his questions but
Caretaker had turned back towards her own musings.
She had been working as the Caretaker of the Ark for so long that the
concept of time had become skewed at best. At worst it had become meaningless.
Just another dimension that would eventually come apart at the seams. But she
found that she did not care anymore. A sort of slumber had its grips on her as she
cycled through inspection periods every other thousand years. The real meaning
behind her tasks had not been considered. The purpose of her life had not been
considered. The purpose of the Ark had skittered away into obscurity as she had fully
given herself to become the Caretaker. A being bereft of life yet somehow still
denied the final rest of death. Time had become meaningless… How could it not
when a thousand years passing changed nothing? Nothing except to immerse her
deeper into this ironically uncaring role of the Caretaker.
She thought back to the early years, when the death of her first dozen cyber
squids seemed like such a great tragedy. How she had walked the hallways and
refused to engage with the replacement, refused to start another friendship that
would lead to grief. But as the years piled on so did the bodies of the squids. As
everything else that is set against endlessness, they had become insignificant. And
that was her last connection to whatever she had been before becoming the
Caretaker.
And now I am to talk to a God. To what end? Tipy is right. He’d have called on
us if there were a solution. And anyway… Would it be so tragic to let this go? Why do
we cling on to life? Why should we survive? How fucking arrogant… Even the
meaning of space and time is coming apart yet we somehow think that we are
different. We can make it through, we deserve to make it through. I swear, there is
no graciousness to the living. Only a gluttonous yearning for more years.
They arrived to a pair of colossal doors and stood silently in the darkness.
After a while Tipy began to shift from one pulsating color to the other, anxiety
flowing from him. He seemed to feel her hesitation.

Talk to a god. I’ve been on this damn ship for the lifespan of a million stars
and have never seen him. I wonder… Does a god ever feel loneliness? Does he feel the
pointlessness of our task?
An explosive release of air suddenly interrupted her thoughts and the doors
began to slowly open. A ruthless red light engulfed them both as Endgame laid his
eyes on the pair.
In a way, it seemed ironic that Endgame reflected the whims and vice of his
creators. He was colossal and lacked elegance. A being fit only for purpose.
Caretaker found that she could barely hold back a laugh as she realized that she was
basically looking at a giant, red head.
The three of them stood, none saying a word. Tipy pulsed a low white while
perched on her shoulder. Endgame looked, with his dead cybernetic eyes, at
Caretaker while she shuddered from suppressing her mirth.
The great artificial god, nothing more than a giant fucking head. I wonder if
the irony was lost on the living when they assembled this monstrosity?
“I believe they had greater concerns than the reflection of their faults as a
society.” The sudden, booming voice of Endgame startled her so much that she even
took a few steps back. Does this thing read thoughts as well? What the hell are you?
“I sense a general direction of thought, I do not read it precisely.”
She stood, still unable to say a word. Endgame closed his eyes, robbing the
behemoth of a chamber from their red light. His voice returned, reverberating
through the walls of the hull.
“I have not found a solution. There are a myriad of possibilities but I was
created for certainty rather than probability. Yet it seems as though we have run out
of time so I must act accordingly.” As he spoke those words a number of alerts
suddenly rang out from Caretaker’s sensors. Somewhere on the Ark, a hangar was
opening.
“What- , what are you doing?” She took a tentative step towards Endgame.
“I am doing what I’ve been built to do.” His form began to shimmer, the
outer edges of his form started to vibrate. And suddenly the most human thought
she had had in a million years, coalesced in Caretakers mind. Wait… Is this giant
fucking head, actually bailing on us? The absurdity actually made her laugh.
“I am ensuring the survival of life.” And with that final thought, he shimmered
out of the chamber. Through her sensors, Caretaker realized he had shifted himself
into a large ship that she had previously not even known was aboard the Ark. She
frantically cycled through cameras until a clear picture was finally projected onto her
iris.
A long sarcophagus-like ship slowly exited the Ark. Her sensors signaled that
it was prepping for a hyper-jump. It was absurd.
“What the hell is happening?” She spoke the words out loud and noticed Tipy
blinking in confusion. But this was real, it was all real and she had to sit down to
control her laughter. She had come to life with madness.
“Caretaker? What happened?”
She looked at Tippy, the movement of her head suddenly more natural than
mechanic, and laughed maniacally. 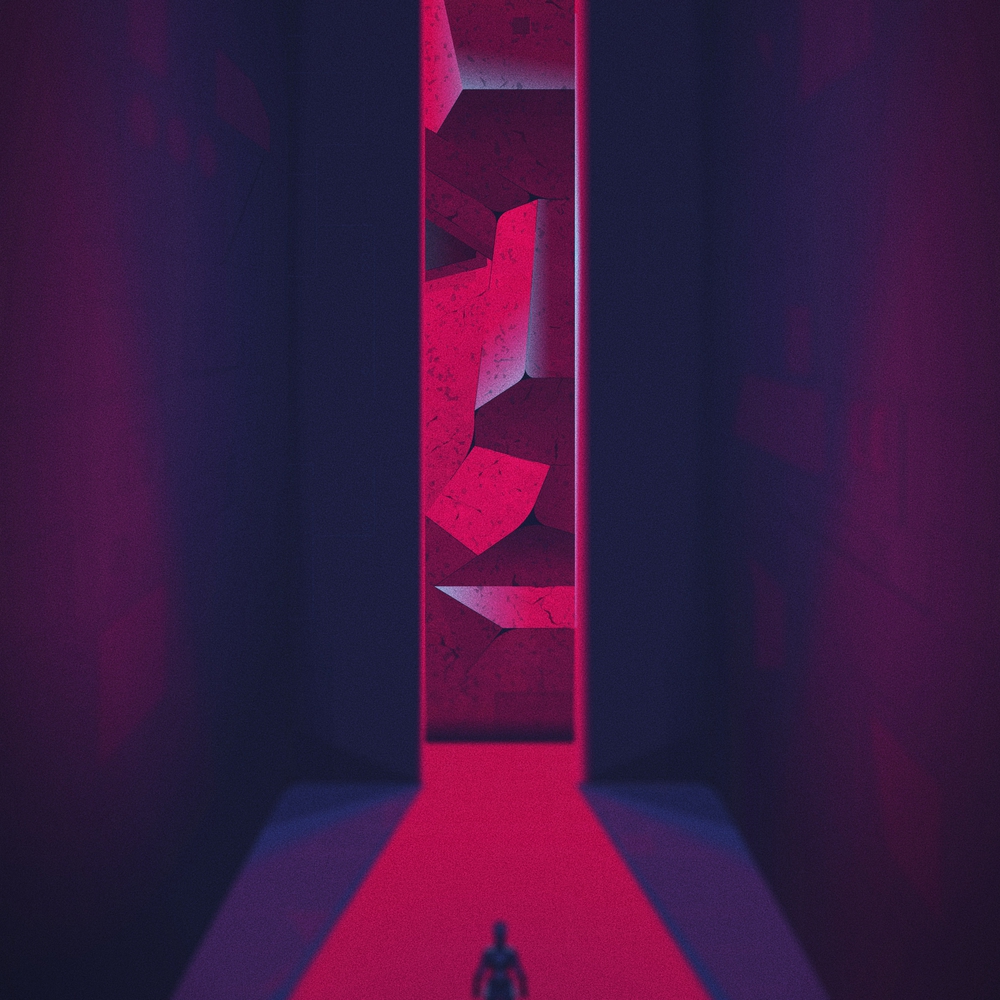 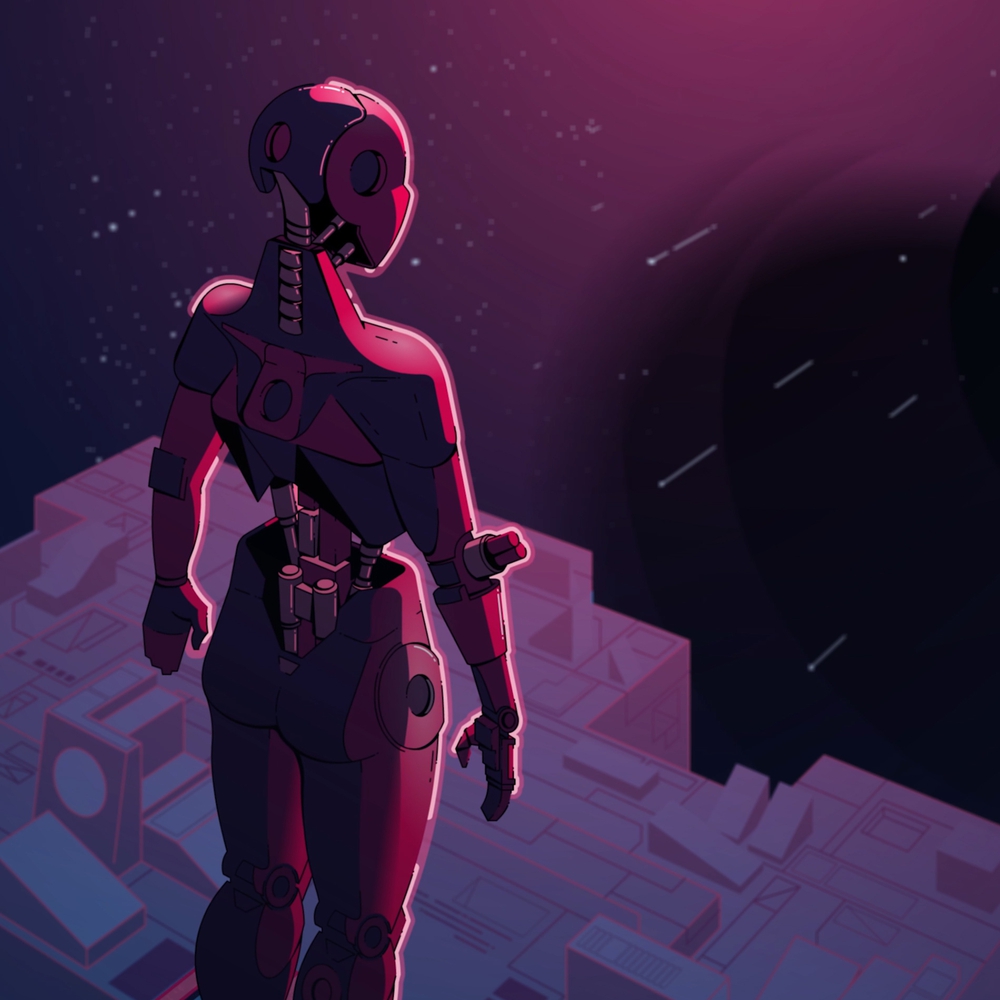 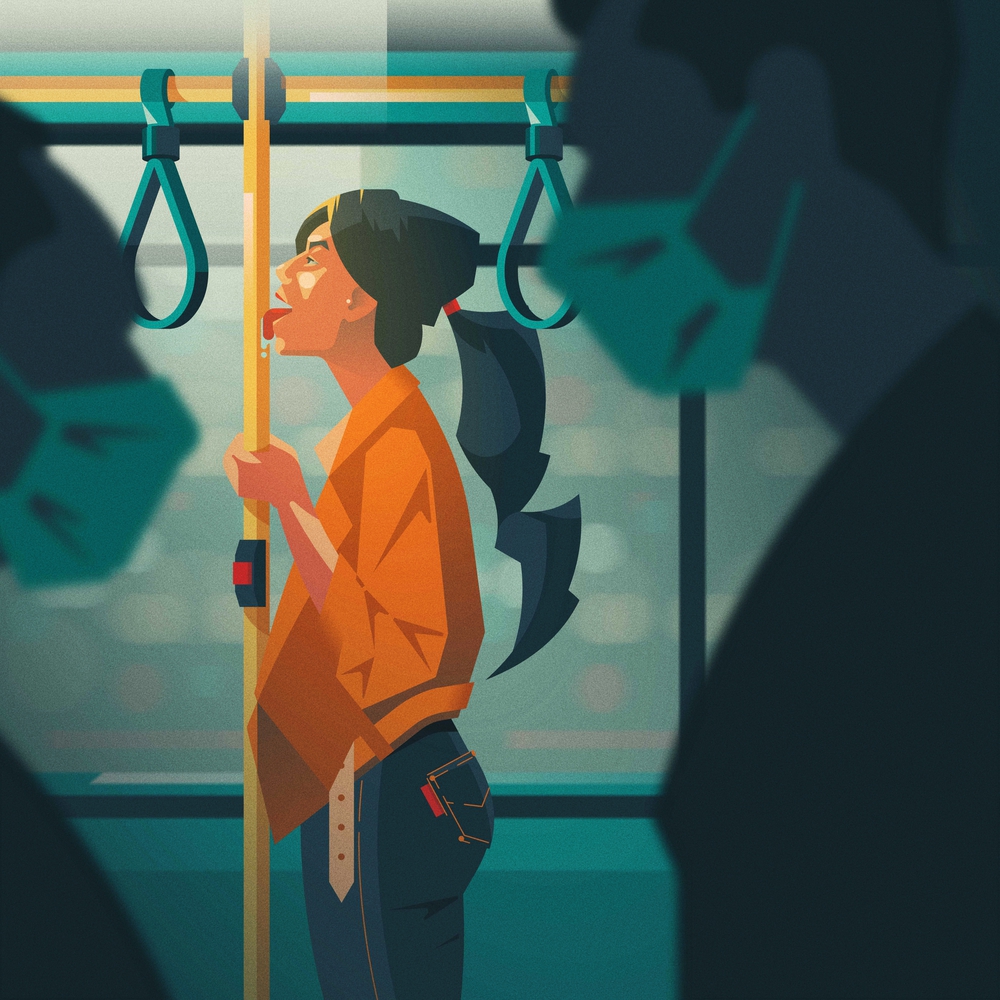 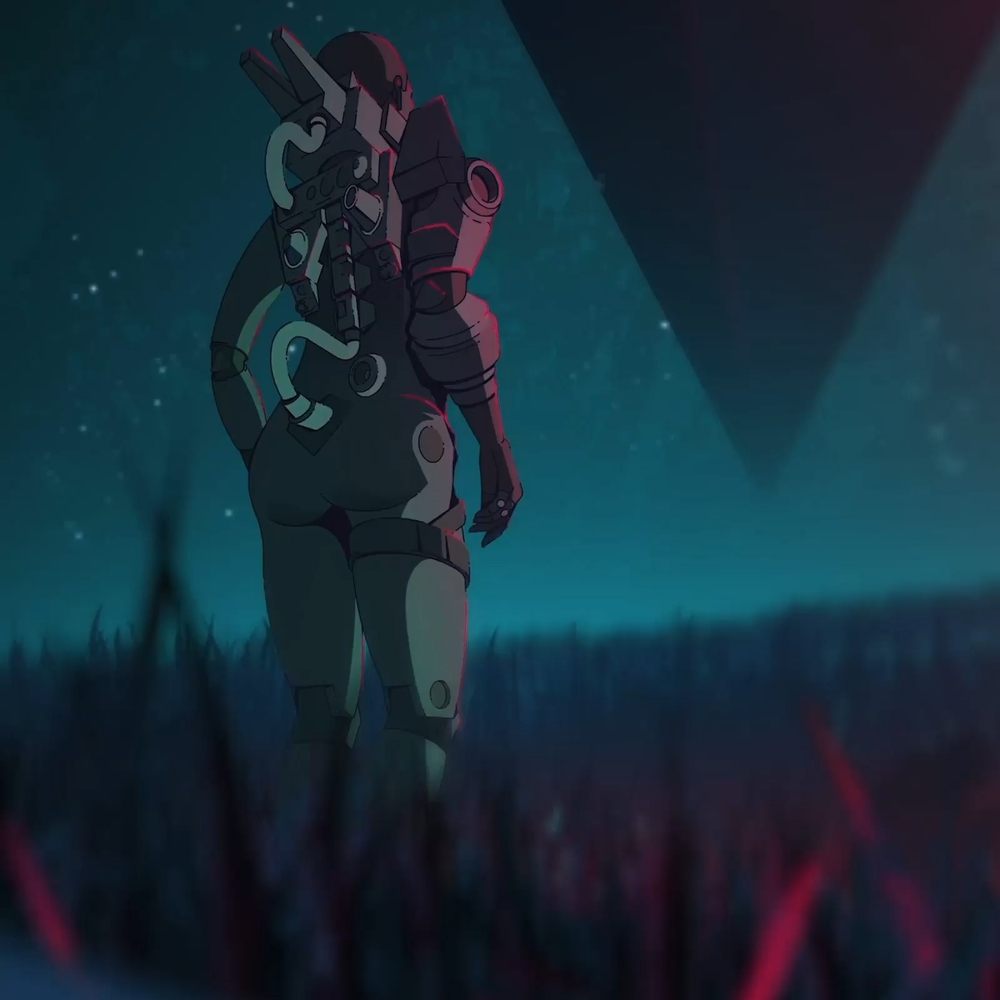 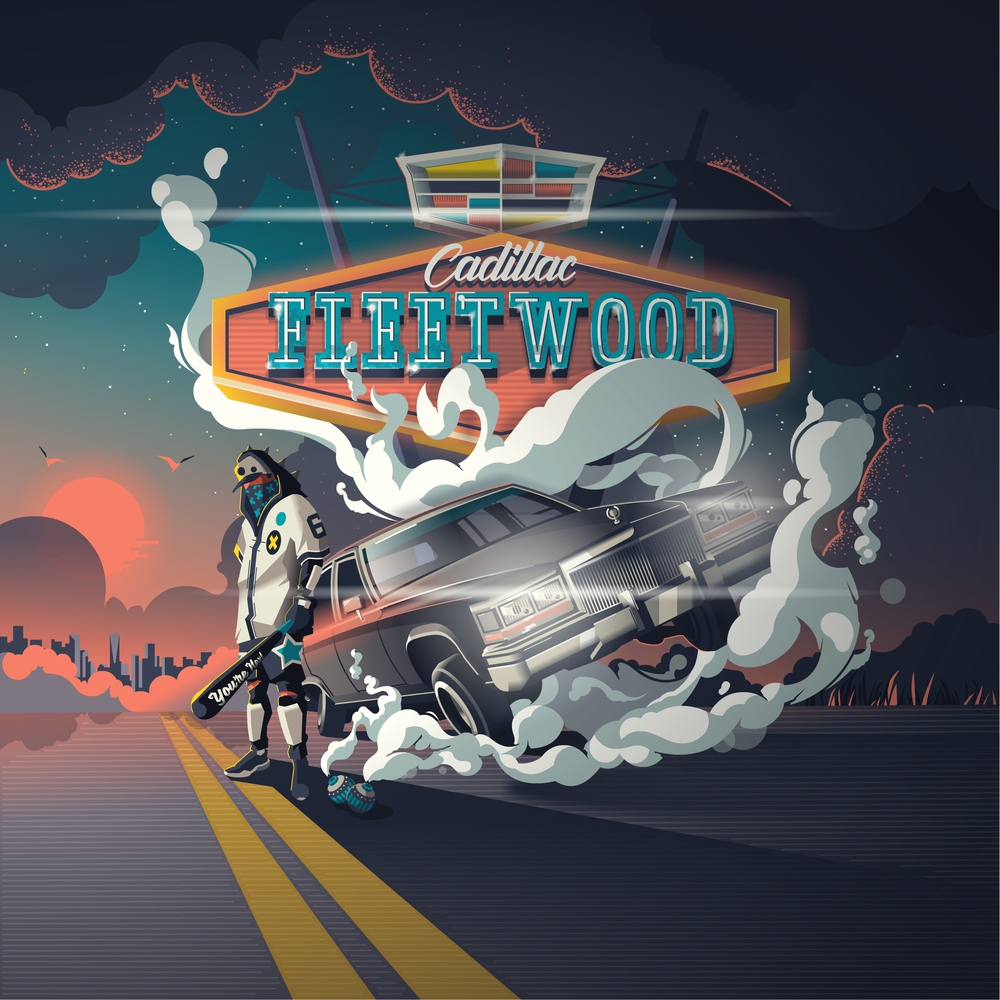 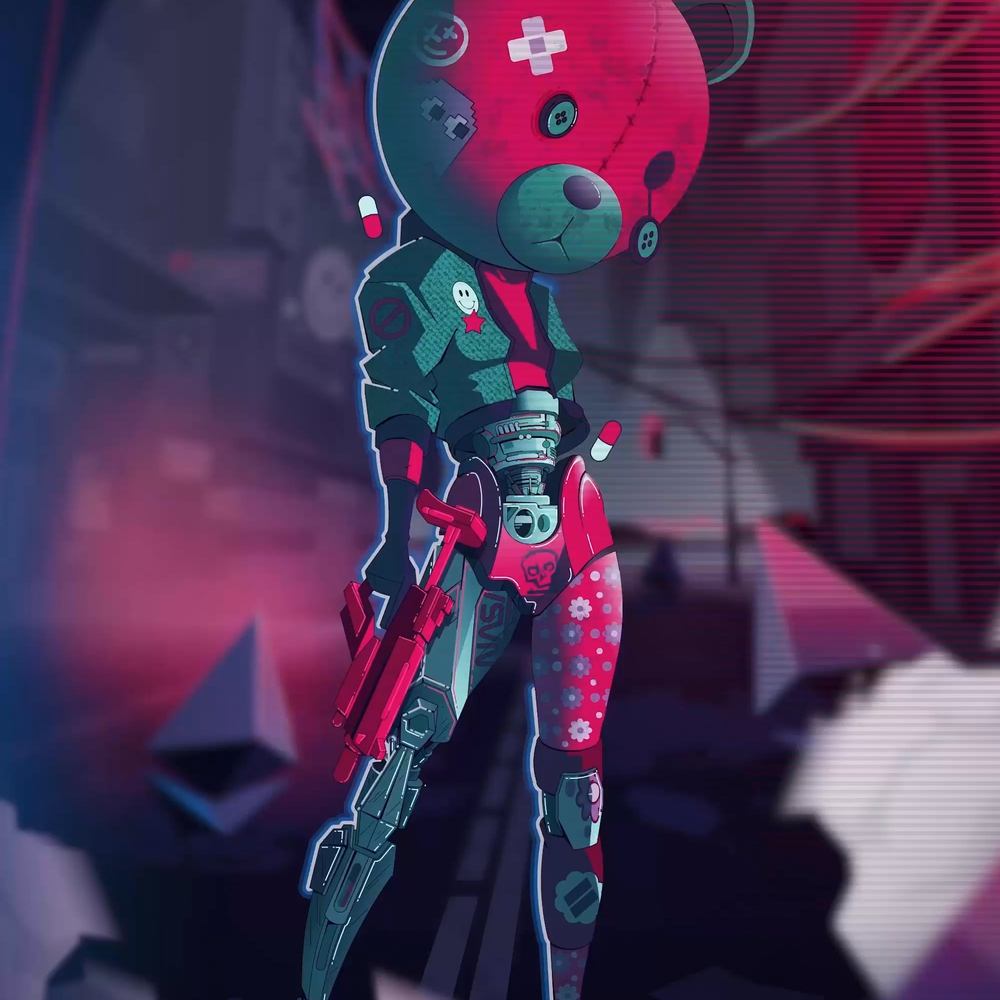 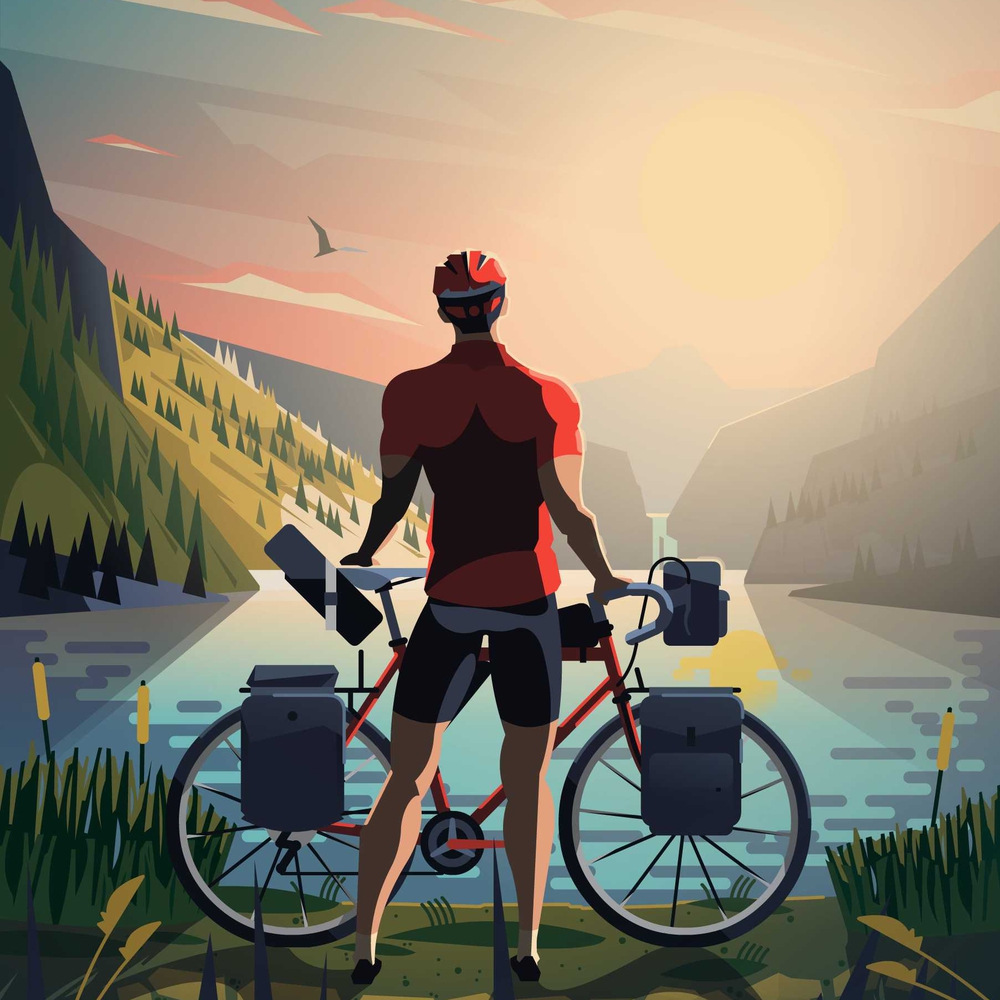 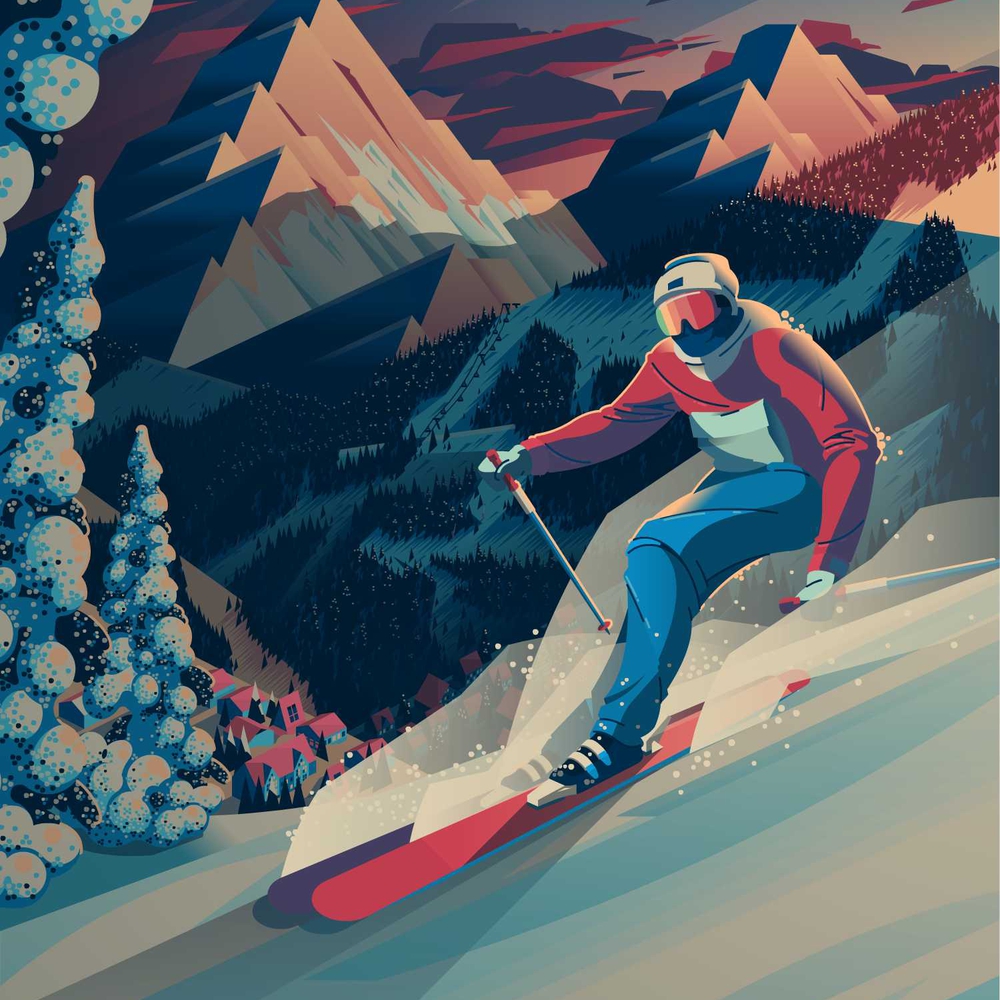 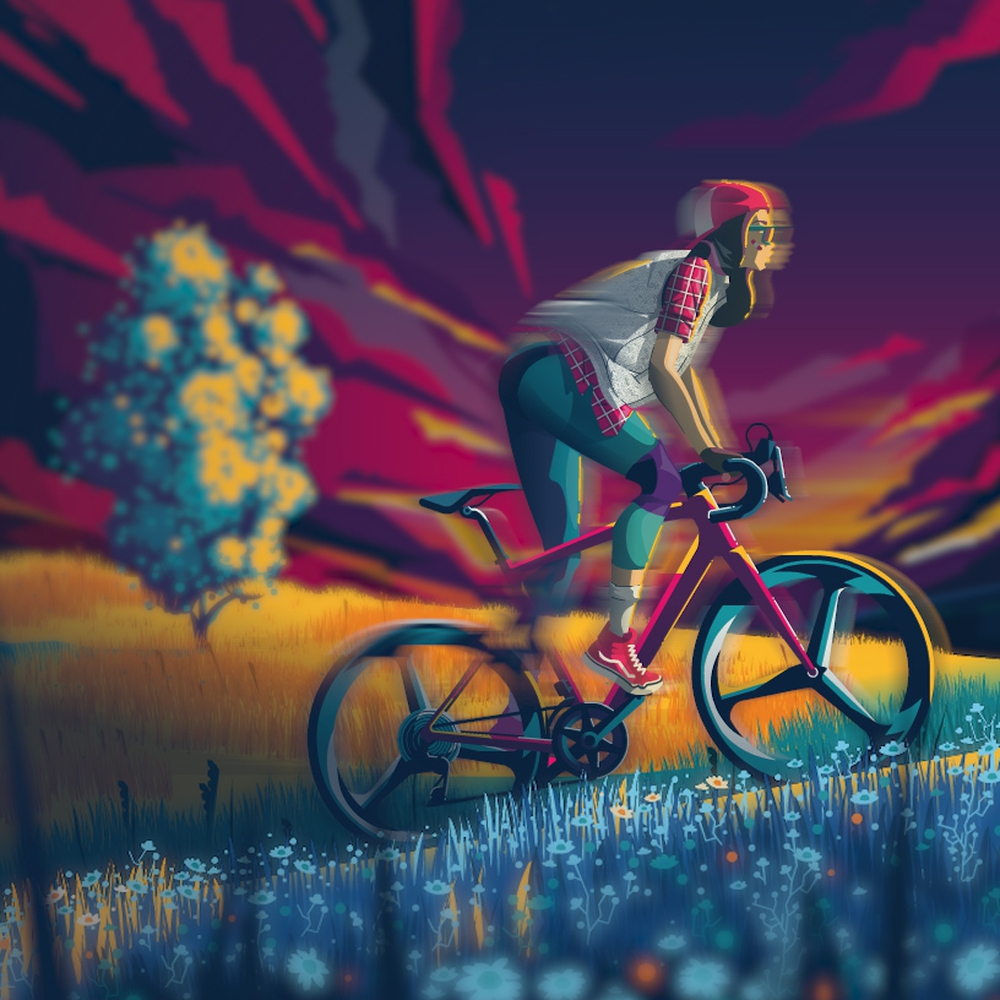 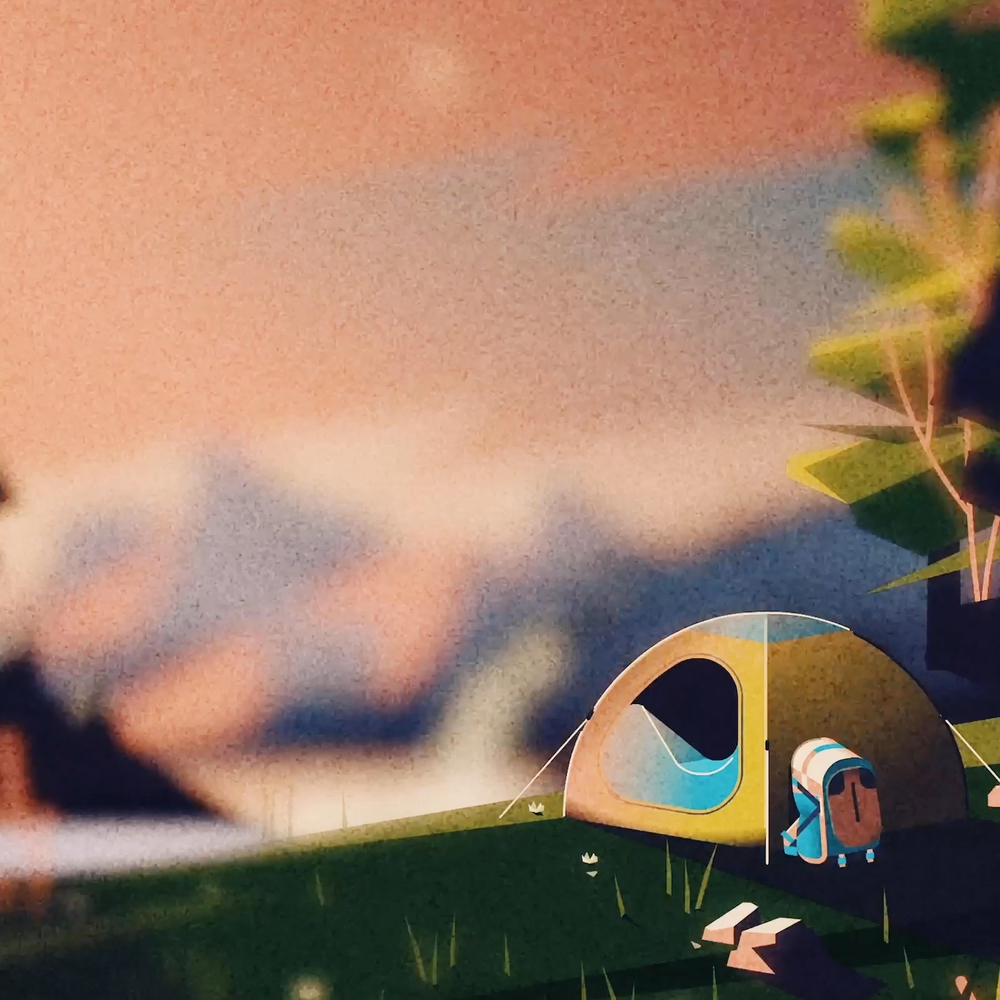 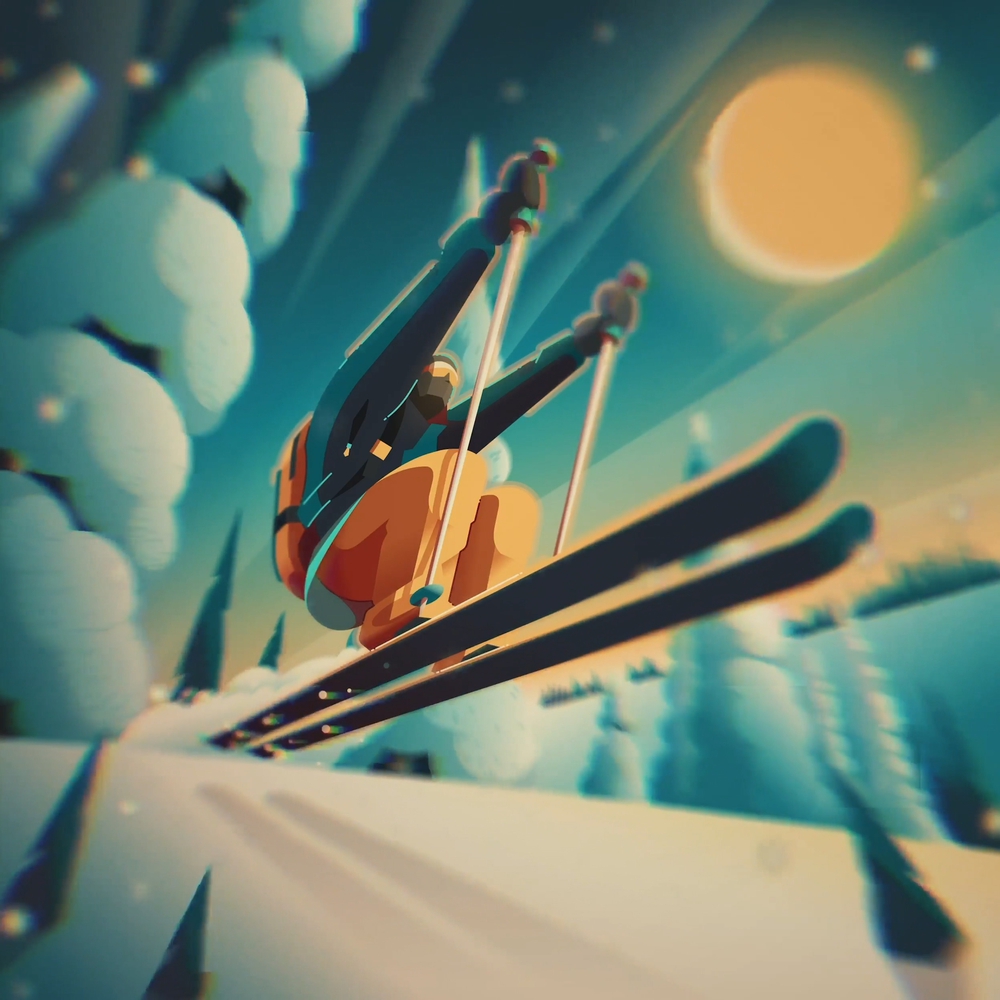